When Not to Start 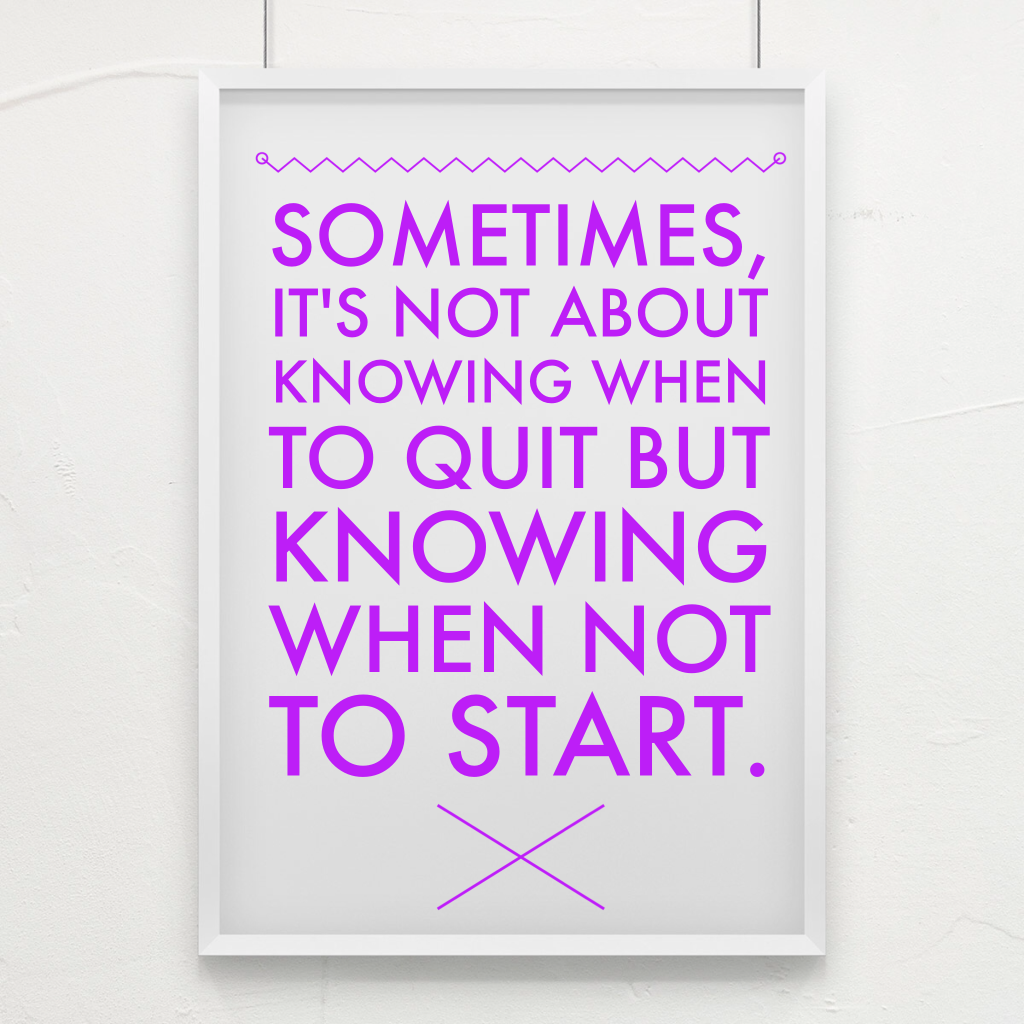 Do you want to kick yourself because you’re the kind of person who starts a bunch of things and never seems to finish?

Here’s a post that will let you off the hook:

I just had the best idea. I think it could make a big difference in the lives of entrepreneurs struggling to get their names out there and be heard. Like, maybe even a game-changer.

It occurred to me whilst listening to Entrepreneur on Fire during my workout this morning. I paused mid-burpee (as good an excuse as any to stop burpeeing) and jotted down my idea.

Then, restarting the podcast (and squat-thrusting), I started thinking about how to start implementing my idea. And that’s when it happened.

Then maybe…this is just going to be another I start and quit because it gets too complicated.

Here’s another way to approach a new idea…and a way to address the problem of quitting before you’ve reached the finish line.

You read that right.

If you start a seemingly super-awesome project before you’re ready, before you’re set up to really deliver, you might be setting yourself up for failure.

Let me tell you this, you can still be an advocate of the adage “Start before you’re ready.” I still am. But I want to help you identify when you should back-burner an idea in deference to other projects you’re working on that will set you up to better deliver the big idea at some point down the line.

Three ways to know when it’s NOT time to start on that new idea.

The idea of the journey makes you want to vom a little. You know there’s a lot of stuff to do to get your idea off the group. And you have no interest in the legwork. There are a lot of little things, prep, inspiration-gathering, foundational work that need to go into actualizing a big idea. If you’ve got no interest in doing the groundwork, then perhaps it’s not the right time to start building.

You can’t picture the on-ramp. You can only picture the highway. You aren’t sure how to get where you want to go, yet you can see yourself delivering the final product. It’s time to get on some research and development. This is kind of like starting. So, good, you get to be a person of action. But you also get to give yourself the breathing room you need to get started without really diving into the deep end. If you don’t know which exit to take and which ramp to get on to get to your destination, start researching maps.

There are other things you promised yourself you would do that you haven’t made good on yet (that will feed this new big idea.) Making good on your promises to yourself (and to others) is a real confidence-builder. So, don’t be tempted by the bright shiny new idea. Don’t use it as an excuse to abandon the project you know is next in the hopper. In my case, my new big idea could be fueled by a free webinar I promised myself (and my biz BFF) I would produce. The prospect of producing my first webinar carries with it a learning curve and all the complications associated with “putting myself out there.” But, I know I have to do it. Because I have something useful to share. AND because it feels like the a next step between here and the new big idea. So don’t start a new project if you have old one lingering the completion of which could assist in the long run.

Set up a system to capture these back-burner ideas. Dedicate a GoogleDoc to ideas yet to be actualized. Put them in your to-do list, even if there’s nothing to do yet. It sets an intention. Add them to your calendar on a later date on which you will start your groundwork. Write them down in a notebook you swear to yourself you’ll go back through at some point, and then actually go back through it to collect your ideas. In short, just figure out how to collect them in a way that will work for you. Because there is some brilliance to-be in there.

Is there a bright shiny new idea you’ve been playing with? Will you back-burner it or is a-go? Tell us in the comments below or tweet at me @AmandaBerlin

If you liked this post, say thanks by sharing it: