Ep. 53: Jenny Fenig; How to Cash in on Your Calling 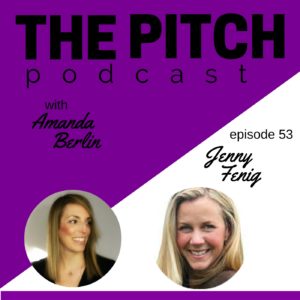 Jenny Fenig is a brand strategy coach to spiritual entrepreneurs ready to boost their message, reach and faith. Through Jenny’s courses, coach certification school, podcast, and bestselling book Get Gutsy, she guides you to cash in on your calling®. She’s married, lives in the Berkshires, and has three kids!

During this episode, Jenny shared many details of her journey on various paths. After many years as a successful PR executive and then conference organizer, Jenny finally heard and listened to her calling as a coach. She has been soaring ever since. In fact she was just selected as a finalist for a Stevie Awards as Coach of the Year – something that wouldn’t have happened if she had disqualified herself before even trying.

Jenny talked about the recent growth of her organization once she expanded her team. As much courage as it took to drive forward, the growth would not have occurred had she not let her team grow. But she did point out that her success and her business has been a series of pivots and a series of tests to find what works for you.

When it comes to getting out there with the media and raising her profile, Jenny calls herself a Content Creating Queen. She engages in a great deal of social media, has her own podcast and loves being interviewed on other podcasts. She has worked hard to refine her message and now works hard to get it out there so that she can serve as many people as possible.

But when it came to her burning publicity question, she does want to know how to get featured in more mainstream media. Now that she is so clear on her message, we talked about how she can create a simple pitch and present herself as a source for story ideas. With her ability to create relationships and connections, Jenny instantly had great ideas about how to reach out to the media and make herself as a person of great value. We talked about her pitching herself as a contributor as she is an outstanding writer. We discussed a couple of top outlets that she could easily land as a contributor.

I feel strongly that we will be seeing her in a major magazine soon!

To find out more about Jenny, please visit www.jennyfenig.com